Showing posts from 2019
Show All

December 10, 2019
Court of appeal ruled that the city’s anti-mask law will remain unconstitutional, rejecting
a government request to suspend an earlier order.
The government’s appeal against that suspension will be heard in January 2020.
SCMP / HKFP

China has set up a Hong Kong crisis command centre in Shenzhen ...

November 24, 2019
71.2 per cent turnout rate = 2.94 million people voting.
Of the 452 seats, pan-democrats won 347, independents (many of whom are pro-democracy) won 45, and pro-establishment groups won 60.
The result lets pro-democrats take control of 17 out of 18 district councils.
The Democratic Party was the most successful party, winning 91 of the 99 seats it contested.
The Civic Party won 32 seats.
The Democratic Alliance for the Betterment and Progress of Hong Kong won only 21 of the 181 (HKFP)/179 (SCMP) seats it contested.
The pro-Beijing Federation of Trade Unions won just four of the 62 seats it contested.
HKFP / SCMP

November 11, 2019
Shooting happened around 7.15 am on Monday morning in Sai Wan Ho. HKFP
Man set on fire later in the day in Ma On Shan. HKFP
Post a Comment
Read more

Another Saturday of protests

October 27, 2019
In the 21st weekend of unrest, protests began with a rally in Tsim Sha Tsui. After police fired tear gas, etc, the protests spread up Nathan Road to Jordan and Mong Kok and eastwards to Hung Hom and To Kwa Wan. RTHK / Reuters
Clashes continued for around 10 hours. RTHK / RTHK

October 06, 2019
March on Hong Kong island.
March in Kowloon.
“Tens of thousands” took part according to SCMP.
Banks and other mainland-associated businesses attacked and damaged.
PLA barracks in Kowloon Tong issued a warning after protesters shone laser pointers at the building.
HKFP and more from HKFP.
Photos from HKFP.
Post a Comment
Read more 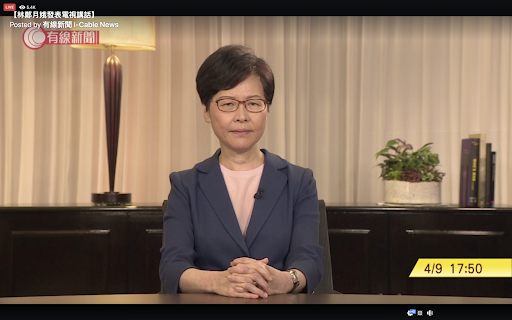 SCMP
What a picture:

September 02, 2019
Also reported Lam as saying: “For a chief executive to have caused this huge havoc to Hong Kong is unforgivable.”
Reuters
Post a Comment
Read more

August 30, 2019
Wong arrested for organising, inciting and taking part in an illegal assembly at Wan Chai police headquarters on June 21; Chow for inciting and taking part in the same assembly.
Chan was arrested the evening before (Thu, 29 Aug 19), for rioting and assaulting a police officer during a protest at Sheung Shui on 13 Jul 19.
SCMP
Reuters
Post a Comment
Read more

Tear gas returns to Kowloon after week of peaceful protests

August 23, 2019
Protest marked the 30th anniversary of the Baltic Way, when on 23 August 1989 about 2 million people in Estonia, Latvia and Lithuania formed a 680-kilometre human chain as part of their struggle for independence from the Soviet Union.
SCMP
YouTube
Post a Comment
Read more

August 13, 2019
Hong Kong airport cancelled flights for a second day after protesters filled the terminal. During scuffles, one police officer drew his pistol after protesters seized his baton. ReutersHKFP Protesters detained two mainland men, one for more than three hours, the other for just over half-an-hour. The protesters accused the first man of being an undercover agent from mainland China. They surrounded and held him until police secured his release using pepper spray.  HKFPSCMP Protesters accused the second man, who was wearing a yellow vest, of pretending to be a journalist. [He was subsequently confirmed as being an employee of China's Global Times media organisation. Mothership.] They bound his hands with plastic ties. He was taken away in an ambulance after being held for more than 30 minutes.  HKFP  SCMP
More on protesters detaining two men. China Digital Times

Christine Loh, Hong Kong has been warned: come together and stop the city’s descent into chaos, SCMP, 30 July 2019